The March challenge on the CAS Stencil Challenge Blog is to use the Ghosting Technique and there are many examples and tutorials around on the internet and probably elsewhere.  I started by sponging  three colours of Distress Oxide in a fairly heavy layer onto some white card, placing a stencil on top.  This was spritzed with water and the stencil lifted immediately to avoid water running under the edges of the design.  After leaving the water for a short while the piece was blotted with a kitchen towel which has lifted some of the ink - causing the ghosting effect.  As this is a CAS style of card I simply glued the panel in place and added a die cut flower silhouette and a stamped sentiment. 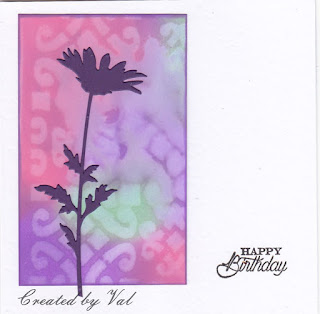