Here is my card for the fortnightly challenge in the Pixie Playground and I have to confess that despite trying to stay away from the newsagent's shelves I did succumb to picking up the magazine which was giving away a set of pretty stamps along with a nice teacup die.  I've used the die and a floral stamp from the set to make this card using up various snippets of paper and white card from my stash.  The background paper is from a pad which I must have had for many years and everything else was using up bits and pieces.  The flowers were stamped, coloured using alcohol pens with a touch of pencil and then fussy cut with scissors.  After die cutting the teacup I used a snippet of darker blue card to pop behind the detail areas. 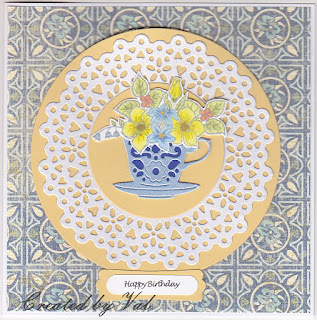