Sorry ... back to a bit more stitchery today.  You may recall I mentioned the Jelly Roll 'race' quilt a few weeks ago (look for it on YouTube where there are how-to's).  A friend had asked to see my quilt and the easiest way for now was to pop a photo on here although as the quilt is large it was a bit difficult to take a picture in a small space.  I used two rolls of fabrics for this and the quilt measures 64 inches square.

I'd seen these  rolls of Tilda fabric and quite liked the colours, spotted the 'race' idea and decided to go for it.  An original Jelly Roll has 40 fabric strips and usually, I think, quite a wide variety of designs included whereas these contained 24 strips consisting of only 12 different designs which meant once they were all randomly sewn together there wasn't as much variety in the look as I would have liked.  Once it was all put together I felt it certainly lacked 'something' and eventually decided to appliqué motifs randomly over the surface to break up the stripey look.  I drew a template in a couple of sizes, then purchased pink fabric from the same range which picked up on the pink in some of the stripes so that I could scatter the flowers across the area - the quilt was also bound in one of the pink fabrics.

The photo isn't the best but as I said taking a photo of a large quilt in a small space is a bit difficult.  I'm still not sure if I like it or not but I do think it would have been better with a wider variety of fabric designs to start with.  The way they are sewn together really gives no control over how they turn out in the end and to my mind there are too many areas of 'sameness' here although I do think the flower appliqué is an improvement overall.  This was a project I just wanted to try - would I make another?  Probably not although I certainly enjoyed the process which is the main thing. 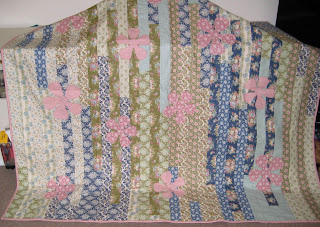