When I spotted the new Docraft Creativity magazine with this wonderful free stamp as a give away I thought how good it would be for male cards. I'm not entirely sure but I think this type of globe is called an orrery or maybe an astral globe - perhaps someone clever might be able to put me right on this? What I should have done was do my research before writing this post!!

I stamped three times and embossed, then cut out some of the elements to layer.  There is a great new collection of Horology items with a steampunk feel  which makes them suitable for making these often difficult cards.  The background paper is from the same range, but the embossing folder used is one I already had although there is a new one from Docrafts with clocks and cogs as well as other exciting folders and new dies (very tempting). The embellishments were cut using a new die set which has a selection of cogs but I must say they were a bit fiddly to remove from the dies when cut despite using silicone paper with the kraft card. The sentiment is one lying around on my work space which I'd stamped a while ago and not used but it seemed to just fit nicely with the rest of the card. I now have a little pile of die cuts to make up a pocket watch - again a bit fiddly to deal with but hopefully they will appear on another male card very soon. 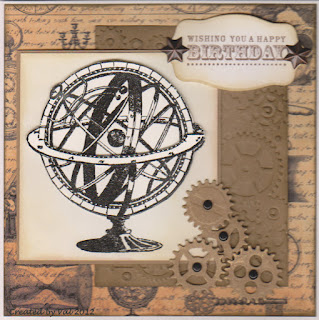